The birch tree is among striking trees offering an attractive ornamental value in cold climates and areas. The birch tree’s scientific name is Betula, and it has about 40 species. Belonging to the Betulaceae family, all these types are short-lived, timber trees and shrubs that are commonly found in cool regions of the Northern Hemisphere.

In the following, we will go through the well-known types of birch trees, and the overall conditions that this genus requires. Before starting the birch tree identification, let us find out more about its physical attributes.

Signature features of birch tree types include smooth, resinous, varicolored bark with horizontal lenticels or pores. Interestingly, the birch tree bark peels horizontally in thin sheets when the tree is young. In older trees, the bark is thick and deep, which finally breaks into irregular plates.

Betula branches are short and slender, creating a narrow pyramidal crown. As the tree ages, they become horizontal and sometimes even pendent. Birch tree leaves are egg-shaped or triangular with indented margins arranged alternately on these branchlets. They are bright green and turn yellow when the fall arrives.

Before the birch tree leaves emerge, the drooping male catkins flower. The female catkins, which are smaller and upright, grow on the same tree in clusters resembling a cone. As they mature, female catkins disintegrate and release tiny, one-seeded, winged nutlets.

To avoid any confusion, we are going to introduce each tree with its taxonomic name. Here are the most well-known types of birch trees:

You can identify the Japanese white birch tree, also known as the Asian white birch, with its white bark and thin spreading branches terminating in drooping branchlets. Native to Manchuria, Korea, and Japan (as the name implies), the white birch tree has a medium to large size with a height ranging from 40 to 50 feet. 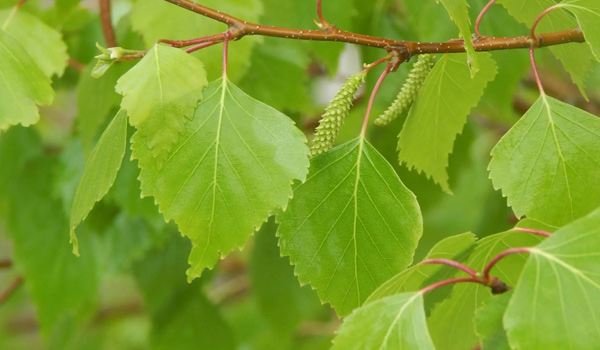 Also known as the sweet or cherry birch, this large tree grows from a single main trunk. This type inherits its common name from the eye-catching red-brown bark and yellow foliage. Features that have made it a popular choice for landscaping in lawns and other naturalized areas.

What separates the silver birch tree is its charming pendulous habit as well as distinctive white bark that peels in sheet-like strips. Like the black birch tree, this type also grows as a single-trunk tree that later transforms from a pyramid crown to a more rounded, oval shape.

This tree was once used extensively for landscaping, but due to its high susceptibility to the bronze birch borer, it has been used less frequently in recent years. You may also know this species as the weeping birch tree or the European white birch.

Next in our birch tree identification list is the Betula nigra also known as red birch or water birch. A fast-growing tree with wide popularity for home landscapes. Growing either as a single-trunk or a multi-trunk tree, it displays dark green foliage that turns a buttery yellow in the fall.

The river birch tree is easy to identify by its beautiful salmon-pink to reddish-brown bark. When exfoliating, the main, distinctive bark reveals the lighter inner bark. An attractive feature that makes this species a year-round interest in all landscapes. It also has good resistance to the bronze birch borer while being considered a heat-tolerant birch.

As the name implies, this Betula type has thin white bark that often peels in papery layers. Also is known as the canoe birch or white birch, papyrifera is native to Alaska, Canada, and northern U.S. states. Paper birch trees can grow either from a single trunk or in small clumps with multiple trunks.

This birch tree leaves, buds, catkins, twigs, and even bark are food sources for birds and other animals. In addition to some resistance to the bronze birch borer, it is interesting to know that Native Americans used this species to make different products from footwear to their famous canoes. 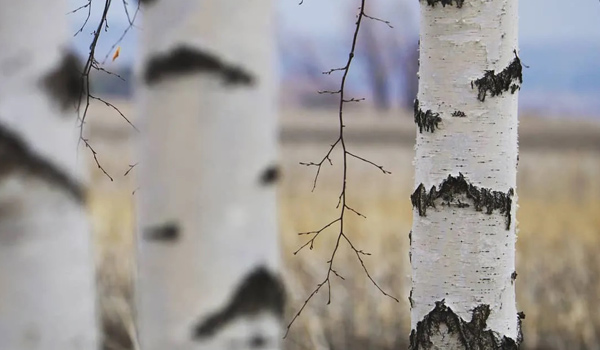 The name weeping birch is repeated in birch tree identification lists. It is good to remember that birches known by this name are different naturally occurring or cultivated varieties of silver birch (Betula pendula), described above. Some of these common varieties include:

As the name suggests, this is one of the small types of birch trees (6 inches to 3 feet) also known as the bog birch and arctic birch since it is native to the arctic, northern North America, and cool temperate regions such as tundra landscapes. It is found in Greenland, Iceland, northern Europe, and northern Asia.

Dwarf birch tree prefers sites with full sun, as well as rocky, nutrient-poor, acidic soil that is moist yet well-drained. Although you can grow it in various conditions, it is not a favored choice for landscaping. Nevertheless, it is an important cover for the mentioned cold territories.

Compared to the paper birch, the grey birch barks are an ashier white. But the leaves, with their glossy dark green foliage and long, triangular, sharply pointed shapes are even more notable.

Among birch tree types, this species is perfect for poor, acidic soils, and cool northern climates. It also tolerates dry and wet conditions and reaches 20 to 40 feet in height when mature.

Due to its size (60 to 75 feet) and darker bark color, this species is rarely grown in residential gardens. However, those who decide to include them while landscaping, will enjoy its brilliant golden yellow foliage in the fall. The yellow birch tree leaves with their beautiful soft metallic sheen are also highly resistant to leaf miner, a severe problem for white-barked species.

Also known as the swamp birch, curly birch, gold birch, or hard birch, this single-stemmed Betula is an important food source for birds and wildlife. 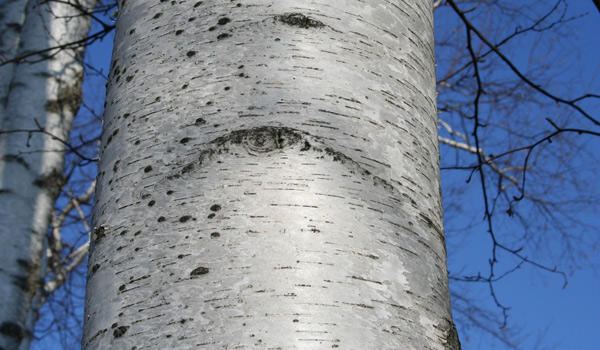 Native to North America, bog birch is a medium-sized (5 to 10 feet) clump-forming shrub with a short period of life. Among types of birch trees, this species thrives in wet sites and is an excellent choice for rain gardens, growing well around bodies of water or in boggy areas.

Growing this plant in cooler climates is a great idea since it is highly susceptible to bronze birch borer and usually requires removal and/or replacement in warmer climates.

You can find this plant along streams in mountains growing in dense clumps where there is Full sun to part shade. It has a smooth dark red-brown bark that does not peel, unlike other birch tree types.

In shrubby form, it reaches 25 feet in height. And as a tree, it grows to 40 feet. It is a food source for wildlife as well as lodge material for beavers in the region.

By providing the right condition and proper care, any of these trees can be the perfect fast-growing landscape plants that you are looking for.